Researching and writing this story is a lot of fun. It is also a lot of work! But every once in awhile, while digging around for substantiation of some fact or another, I stumble upon something that is related to our story (sort of…) or is just plain interesting.  I admit it – I can get sidetracked! Today’s post is one of those interesting “asides” that amused and educated me and so I thought I would share it with all of you.

June marks the 131st anniversary of the arrival of the Statue of Liberty in New York City.  Why should that be of any interest to my family?  It has meaning to my Doyon ancestors, as well as to my Voigt family. As you know from previous chapters, the Doyon family first shows up in the town of Saint-Marcellin on the River Isère.  Isère was the name of the ship that transported the Statue of Liberty from France to America in 1885.

The Isère arrived in New York City with its 225 ton cargo on 18 June 1885. The Isère wasn’t very unique or special as frigates went – she was a propellor-driven steamship with three masts – 215 feet long with a 30 foot beam. It took 17 days to stow the 214 crates containing the 350 pieces of the statue on board. Every crate made it across the Atlantic unscathed – and from what the records state – it was not an easy voyage.

Completed in 1867 as a transport for the French navy by Chantiers Navals Ã la Pointe de Caudan, Lorient, the Isère carried a crew of 69 men. She was disarmed in 1909 (she carried no weapons on her most famous voyage to America) and was taken out of service in 1911.  She was hulked and towed to Lorient in 1924. After Lorient was captured by the Germans in June 1940, they used her as a berth for their U Boats while they completed building bunkers. During the night of 13/14 February 1943, the RAF dropped 1,000 tons of bombs on Lorient and the Isère was badly damaged.

But she made quite a splash when she arrived in New York Harbor in the summer of 1885, just two weeks before our own Fourth of July celebrations would begin.

The New York Times, Pacific Rural Press and Frank Leslie’s Illustrated Newspaper carried extensive articles on the arrival of our most famous statue.

Those of us who are over the age of sixty, attended grammar school in the 1950s and 60s. Back then, we were taught a lot about American history, and I clearly remember our teacher telling us about the Statue of Liberty. At the time, probably fourth grade, I was fascinated by the whole story – so much so, that I memorized Emma Lazarus’s sonnet and in high school, while taking a course on public speaking, chose to speak about that inscription and what it meant to the American people, especially those who came to this country as immigrants.

As we have just celebrated the anniversary of Liberty’s arrival in America and are about to celebrate our country’s independence on July 4th, it seems like an appropriate time to remember the story of this statue.

First of all, the official name of the statue is Liberty Enlightening the World.  It was designed by French sculptor Frédéric-Auguste Bartholdi and was completed, in France, in 1884.  Once a design was determined, wooden molds were created over which copper sheets were attached and hammered into place. The shell was then joined to an internal iron structure that was designed by Gustav Eiffel, who later designed some famous tower or another in Paris. The entire cost of the statue was funded by donations from the French people, and it commemorates America’s alliance with France during the American Revolution from 1775-1783.  [A member of my family betrayed his own country and fought for the cause of American liberty – but more on that in a future chapter.] Liberty is 151 feet tall and weighs 225 tons. In order to ship her to America, she had to be disassembled and packed into 214 crates – the torch-bearing arm alone taking 21 crates.

She arrived on June 17, 1885 amid a great deal of fan-fare and celebration and was installed on a pedestal built on Bedloe’s Island (renamed Liberty Island in 1956 by an act of Congress). The pedestal was designed by Richard Morris Hunt and built with funds raised by the publisher Joseph Pulitzer. The pedestal is surrounded by a star-shaped wall that was once part of Fort Wood, built in the early 19th century to defend the city during the War of 1812. In October 1886, President Grover Cleveland delivered the dedication address at Liberty’s unveiling.

We are not here today to bow before the representation of a fierce warlike god, filled with wrath and vengeance, but we joyously contemplate instead our own deity keeping watch and ward before the open gates of America and greater than all that have been celebrated in ancient song. Instead of grasping in her hand thunderbolts of terror and of death, she holds aloft the light which illumines the way to man’s enfranchisement. We will not forget that Liberty has here made her home, nor shall her chosen altar be neglected. Willing votaries will constantly keep alive its fires and these shall gleam upon the shores of our sister Republic thence, and joined with answering rays a stream of light shall pierce the darkness of ignorance and man’s oppression until Liberty enlightens the world. [2]

“Lady Liberty” was originally intended to work as a functional lighthouse and, from 1886-1901 she was operated by the United States Lighthouse Board. In 1901 the War Department took over her operation and maintenance. The sonnet, “The New Colossus” by Emma Lazarus was inscribed in bronze at her base in 1903 [3]. She was declared a national monument in 1924.

Not like the brazen giant of Greek fame,
With conquering limbs astride from land to land;
Here at our sea-washed, sunset gates shall stand
A mighty woman with a torch, whose flame
Is the imprisoned lightning, and her name
Mother of Exiles. From her beacon-hand
Glows world-wide welcome; her mild eyes command
The air-bridged harbor that twin cities frame.
“Keep, ancient lands, your storied pomp!” cries she
With silent lips. “Give me your tired, your poor,
Your huddled masses yearning to breathe free,
The wretched refuse of your teeming shore.
Send these, the homeless, tempest-tost to me,
I lift my lamp beside the golden door!”

In 1986, the statue’s centennial year, a joint American-French project was begun to rehabilitate, repair and clean Liberty. Today, you can take an elevator or climb the 192 steps to an observation deck at the top of the pedestal. If you are truly ambitious, you can climb the full 354 steps from the pedestal to the crown where you can enjoy one of the most spectacular views of New York City and New York Harbor. I did this when I lived in New York. On a very hot, steamy day in August, four of us climbed up to the crown. Not the smartest move on a hot day in a copper statue. 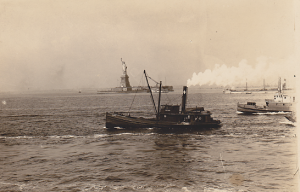 For 131 years, Liberty Enlightening the World has stood in New York Harbor, welcoming all those who come to our shores. The photo on the left was taken by my maternal grandfather from the deck of the Derfflinger as she sailed into New York Harbor on 9 December 1923, the day he first stepped foot on American soil. She was the first “American” thing he saw.

I have often wondered what he was thinking as he framed this image in his camera lens – possibly anchoring his Leica on the deck railing or chair to help stabilize the shot. He came to America to escape rampant inflation and an ever-growing uneasiness about the political and economic direction Germany was taking. His Uncle Paul, sister, Emma and brother, Fritz preceded him here, perhaps giving him the courage it took to leave behind everyone (including his new bride) and everything he knew and loved. Today, we travel the world without giving much thought to our means of travel or our ability to communicate. We have jets and smartphones with apps that can translate our words in real-time to just about any language we need, and Facebook and Twitter. But in 1923, all an immigrant had were his convictions and a compelling self-confidence in his ability to build a new life in a new land. If you take a moment to put yourself in the place of immigrants like my grandparents and those who came before them, it’s pretty heady stuff. 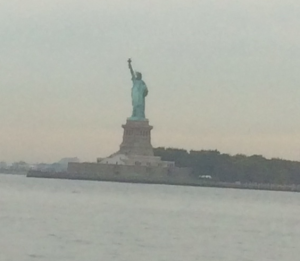 Ironically, when my sister and her husband sailed through New York harbor, on her first trip through the harbor by boat, she snapped the photo on the right with her iPhone. It is almost identical to the one snapped by her grandfather 90 years before.

If you look up the definition of “liberty”, the Merriam-Webster dictionary will tell you it is the state of being free within society from oppressive restrictions imposed by authority on one’s way of life, behavior or political views. Liberty stands for everything embodied in our Constitution. She is the essence of who we are and what we stand for. So Liberty and the ship that brought her to our shores has meaning to both sides of my family.  While you are celebrating our country’s independence, I hope you will take a moment to remember that we celebrate because we have the liberty to do so.

[1] Library of Congress Prints and Photographs Division Washington, D.C. 20540 USA, call no.:  Illus. in AP2.L52 1885 (Case Y) [P&P]
[2] Excerpt from dedication speech by President Grover Cleveland, 28 October 1886
[3] “Lazarus’ famous sonnet depicts the Statue as the “Mother of Exiles:” a symbol of immigration and opportunity – symbols associated with the Statue of Liberty today. After its initial popularity however, the sonnet slowly faded from public memory. It was not until 1901, 17 years after Lazarus’s death, that Georgina Schuyler, a friend of hers, found a book containing the sonnet in a bookshop and organized a civic effort to resurrect the lost work. Her efforts paid off and in 1903, words from the sonnet were inscribed on a plaque and placed on the inner wall of the pedestal of the Statue of Liberty. Today, the plaque is on display in the Statue of Liberty Exhibit in the Statue’s pedestal.” Excerpt quoted from National Park Service website.

One thought on “Author’s Notebook – The Isère and Liberty”

Unraveling Our Story - One Twig At A Time

behind the cupboard doors

Unraveling Our Story - One Twig At A Time